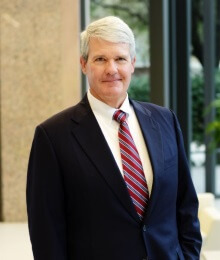 After active duty training in the Army Reserves and upon graduation from the University of Texas School of Law in December 1972, Rick Gump began his career as the 22nd lawyer at the Dallas law firm of Akin, Gump, Strauss, Hauer & Feld, formed by Robert S. Strauss and Rick’s father after World War II in 1945. While Rick worked primarily on business structuring and bank representation (bank formation and lending, commercial transactions, etc.), his first immigration client emerged from a bank customer in 1973 when he developed experience in investor visas and labor certifications by opening three ethnic restaurants. By 1993, he made the complete transition to immigration law and opened his own firm to concentrate on assisting businesses and individuals cope with increasingly complicated immigration laws. His background with a sophisticated growing law firm coupled with experience in business, banking and commercial transactions set him apart from many of his colleagues.

For over 40 years Rick has counseled individuals and companies on all types of temporary and permanent business and family visas, investor visas (temporary E-2 and permanent EB-5 visas), sports visas, and naturalization and citizenship issues.

Rick has considerable experience in worksite enforcement (e.g. I-9 inspections by ICE and independent audits of immigration related practices).   Rick handled the first employer sanctions case filed in the Southwestern United States under the Immigration Reform and Control Act of 1986 (“IRCA”), and was co-counsel in one of the largest civil/criminal settlements in worksite compliance history.  He advises businesses on risk assessment and strategic planning in order to hire and retain foreign personnel, conduct due diligence in mergers & acquisitions, and create and maintain compliance policies.

An active speaker and published writer, Mr. Gump has served as an expert witness in various immigration cases and has been a faculty member for numerous immigration conferences. He has served on the American Immigration Lawyers Association’s (AILA) Verification and Documentation Liaison Committee, Annual Worksite Enforcement Committee, and Compliance Auditing Standards Committee. He chaired the AILA Texas Service Center Liaison Committee and was Planning Committee Chairman for the University of Texas and State Bar of Texas Immigration and Nationality Law Conferences.

Very active in Dallas community affairs, Mr. Gump has served as President of the Board of Directions of Catholic Charities, the Downtown YMCA, and the Dallas Texas Exes. He was a recipient of the 2005 Dallas Texas Exes Outstanding Alumnus Award and the 2009 Dallas YMCA Theodore P. Beasley Distinguished Leadership Award. Currently, he is a member of the Salesmanship Club and on the Board of Directors of the YMCA of Metropolitan Dallas.